11th Nov. 11:29
My Birthday.
Depressed, so much so, that not even lemon cake can lift the veil.
Terrible nightmare last night. I watched my mother die on the opposite bank of a wide river. Woke with a start, my heart racing.
Took me a good twenty minutes to calm down. I don’t think I’ll bother with an interpretation
Money as ever a problem. Publisher wants more changes to drawings.

Thursday 19th Nov 9:06am
I’ve got an upset stomach, which is unusual for me.
I laid in bed this morning thinking about my childhood sojourn in Whalley Range, Manchester. The top floor flat my mother and I lived in for a while.
I remember how the street looked, but can’t remember its name.
I did the virtual walk to St Margaret’s Church, where a Manchester United player was buried after the Munich air crash.
I was in the choir there for a while.
Prior to living there, we stayed with Aunty Crippen, in her sweet shop near Main Road Football ground. My Aunt had a daily cleaner called Doris. She was very fat and wore a wrap around dust coat and head scarf. I never actually saw her do any cleaning.

Upon arrival she would sit at the table in the back room near the kitchen and consume a whole Nimble loaf, washed down with copious servings of tea from an old white china teapot. Her son lived on chips and potato pies from the chip shop next door. He was sallow faced and very thin.
Every Friday I was sent for tripe and roast ham from the UCP on Main Road. I hated tripe. I thought it was octopus meat and nobody disabused me of that fact. Even now, all these years on I think of it as such.

Whalley Range Bus, Manchester 1950 – (Timex and unwound time)
I saw her most days on the bus to and from school. She was middle aged, at least she seemed so to a ten year old, and well groomed. Although she always smiled and said hello, I never responded. I was always far more interested in the man with the tin leg that squeaked under his trousers when he sat down, even more so, when he fiddled with something near the knee so that it would bend. He was a regular on the bus also.
I think it was a Thursday after school. I was sitting on one of the long seats, near the rear entry platform of the double decker, when she got on, sat down beside me, smiled as usual, said hello, then put her hand on my arm and said loudly: “Isn’t he lovely?”
Then she squeezed me around the shoulders, hugged me to her and said :“Give me a kiss.”
Everybody who could see, laughed, even the conductor. I blushed, extricated myself, and jumped off the bus a stop early.

Nov. 23rd 9:24am
Coffee surges through the conduits. Thud! This is reality. I’m awake. The morning is crisp, no wind yet. Everything is still.
Haircut day, shorn for the March Hare’s Party. Best butter for a pomade. I need a technical pen for the Scott Rohan job. I must learn to draw straight lines with a pointed stick.
Miscellany / something remembered in the stillness. His name was George. He sat next to me in class. He was a nice enough fellow but stank of rotting vegetables. He came into school one morning sporting a basin haircut. The trouble was the basin had slipped in the trimming, so that the cut line was lopsided by about an inch. The lower side rested on his left ear. He said his father had done it on Sunday afternoon after a session in the pub.

*Excerpt from The Broken Diary

First published in the world by ONEIROS 2014. 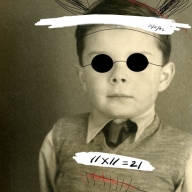